← Get Ready to FALL into Fitness!
Make Your “Me Time” Belong To You → 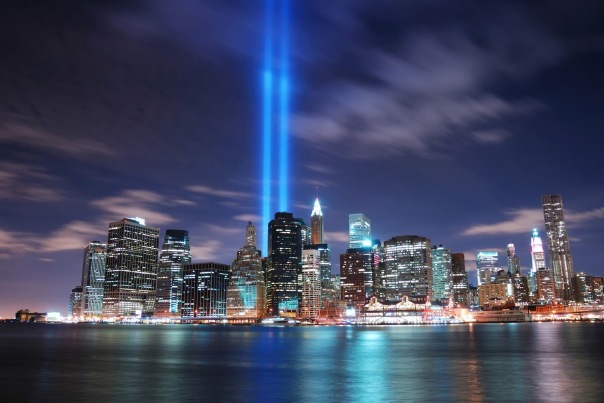 I hope you’ll forgive this diversion from my weekly dose of Monday Motivation. It’s hard for me to write about healthy snacks or fitting fitness into your back-to-school schedule when my mind has been flooded with memories of the day that changed our world forever. At some point this past week, I simply lost count of how many times I uttered or heard the phrase “I can’t believe it’s been 15 years since 9/11.”

Time may march on, but each year the memories are just as vivid as they were on that bright, beautiful day in 2001. I remember the shock, the silence and then the chaos that erupted in the News 12 Connecticut newsroom where I worked as a reporter at the time. I remember the nonstop news coverage and the countless live shots from the Fairfield train station. That’s where a triage team waited to treat injured survivors – only to look more and more despondent with each passing hour that none arrived. It’s also where I interviewed people with dust on their clothes, still in shock from what they had escaped in lower Manhattan. I remember calling my parents to tell them how much I loved them. And I remember the phone calls I received from panicked friends who wondered if I had any information about people working in the World Trade Center.

In the days that followed, I met too many people who lost people they loved. I learned Glen Pettit, one of my News 12 Long Island colleagues and a NYPD officer, was killed. I held back tears while interviewing people who held on to the hope a son, daughter, husband or wife would return home. I held back tears while speaking with members of the Stamford fire department who wanted to do more to help their brothers in the city. In the fleeting moments when I was alone, I let the tears flow freely. Yet in the midst of the sadness, fear, anger and confusion, I also remember people treating each other with kindness and banding together in a way I’d never seen before. Quite frankly, I haven’t seen it since.

Fifteen years later, I found solace going to Mass before taking the subway to Yankee Stadium. I originally felt somewhat guilty accepting the tickets my Dad offered for this game against the Tampa Bay Devil Rays. However, I came to realize doing something I loved on a sunny Sunday afternoon was a testament to the fact that our American way of life survived that terrible day. It turns out, the Devil Rays were the team the Yankees played two weeks after 9/11 as the nation tried to return to some semblance of normalcy, which included resuming the season for America’s pastime.

Before the start of yesterday’s game, with tears in my eyes and pride swelling in my chest, I witnessed a moving ceremony featuring the booming sounds of the NYPD Emerald Society’s Pipe and Drum Corps. I watched Yankees manager Joe Girardi shake the hands of wounded veterans from Walter Reed Hospital who were honored in front of home plate. I listened to the powerful voice of firefighter Frank Pizzaro as he belted out our national anthem while New York City’s bravest unfolded an American flag in center field beside the Port Authority Police Department’s Color Guard. I cried, I applauded and then as I cheered for the Yankees through what turned out to be a loss, I thought: the human spirit is a truly amazing thing. And it is in times of sorrow and struggle that banding together makes us stronger than standing alone. So in the company of that packed stadium, I found another way to honor the promise made 15 years ago…we will never forget.

← Get Ready to FALL into Fitness!
Make Your “Me Time” Belong To You →