I had been looking forward to spending this past weekend in Boston since I bought my Amtrak tickets back in February. Getting tickets to the Red Sox v. Yankees game for my first-ever visit to Fenway Park and seeing my beloved Bronx Bombers beat their rivals in a comeback of epic proportions was a bonus. Earlier in the day, I got to enjoy another first-ever visit to Harvard University’s Blodgett Pool. Thanks to a gracious invitation from the friend of my lifelong friend, Ania, I was able to enjoy a pool-deck view for Boston’s inaugural team relay challenge for Swim Across America.

The event brought swimmers of all ages and skill levels together with one common mission: “making waves fighting cancer.” For two hours straight, the swimmers dove into the pool striving to be on the team making the biggest splash in the fight against pediatric cancer. The proceeds from this event benefit the David B. Perini, Jr. Quality of Life Center at Dana-Farber Cancer Institute. 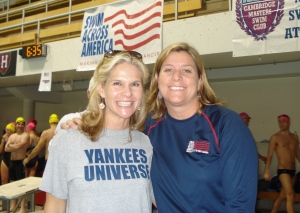 As I watched the swimmers and cheered them on from the pool deck (luckily, no one threw me in despite my Yankees gear), I found myself in awe of their stamina and mostly of their determination to make a difference.

Before the relay started, I was fortunate to meet a woman named Suzanne. She started swimming less than a year ago and here she was swimsuiting up and making a splash in the fight against cancer. I also had the joy of meeting 1988 Olympic Silver Medalist Janel Jorgensen who has been the Executive Director of Swim Across America since 2005. Also on the pool  deck was Craig Beardsley, who would have most likely won gold at the 1980 Olympics had the US not boycotted the summer games in Moscow. Then there was Kitty, who aside from directing volunteers in their tasks that morning also spent countless hours helping organize the relay’s details before diving in with the other swimmers.

While the swim relay spanned a few hours, it’s really impossible to clock the amount of behind-the-scenes prep time leading up to events like these. Between the fund raising, training and hammering out  all those pesky little details, the swimmers and organizers reminded me how a passion for swimming, running or any kind of physical activity can do so much more than get the heart pumping. Using that passion to raise awareness and money in the fight against cancer is one of the best ways I can think of to have fun, be fit and feel fabulous!