If that title sounds daunting, it should. In honor of another Workout Wednesday, I share the latest and greatest killer workout courtesy of Roberto Murichi, UFX instructor extraordinaire.

The workout concept is pretty basic: a one-minute timer starts counting down as we push out three burpees immediately followed by three kettlebell push presses. With the remaining time in that 60-second window, we begin our quest to conquer 200 sit-ups.

When the timer “dings,” a new 60-second countdown begins and we start all over again with the burpees and move on to the push presses. Then we add on to our previous round of sit-ups and continue to push toward 20o. Every minute marks a new start on the exercise trio. Roberto gave us a max of 20-minutes to reach the 200 mark. I finished in just under 12 minutes. (And second to classmate Zac.)

This killer workout has endless possibilities when it comes to the exercises you can include. Sticking with the 200 sit-up goal, options for the other two exercises include squat thrusters, box jumps or even pull-ups. Whatever exercises you choose, I guarantee you’ll finish feeling like you got your butt kicked pretty hard!

Tonight marks my last UFX class for awhile. I can’t thank Roberto enough for opening my eyes to new workout options and for his motivation and energy! I look forward to keeping in touch with my small group training classmates and meeting up to keep the workouts alive and continue along the path to have fun, be fit and feel fabulous!

For the “grand finale,” our (awesome) instructor Roberto Murichi had us run through the same workout we did during our first week so we could measure our gains in cardio capability, strength and endurance. Here’s a look at the program. (Just like the 50-30-20 I wrote about earlier in the week, this isn’t a workout I’d recommend for a fitness newbie or anyone returning to an exercise routine after a hiatus.)

After an eight-minute warm-up which included 20-second bouts of six exercises including push-ups, squats, and sit-ups, we moved on to the heart of the workout. Roberto set up five stations for the following exercises: 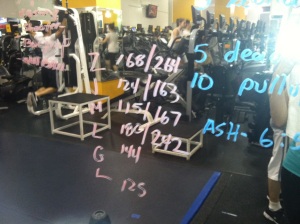 The goal was to perform as many reps as possible in one minute before moving on to the next exercise. After completing the fifth exercise, we got to enjoy one minute of rest! Then we started the circuit all over again for round two. For the third and final round, we had to keep track of every single rep we completed from the first burpee to the last box jump. Those reps added up to our final score.

The first week of the class, my score came in at 180. Wednesday night, I made it to 242. Each of my classmates on “Team Alpha” saw their numbers improve, too. Needless to say, we were all happy with the results!

I’m happy I took Roberto’s class for many reasons, but mainly because it offered a needed jolt to my fitness routine and it also provided a new perspective on high-intensity circuit training. I look forward to one more class after work tonight to make up for some of the time I lost while sipping rum punch on the beach in Jamaica. There’s a very good chance I’ll be signing up for round two of this class which starts in April…so stay tuned for more intense workout ideas to help you have fun, be fit and feel fabulous!