Rest Days ARE the Best Days!

At the start of this journey to my very first bikini competition, I promised to share the good, the bad and the ugly. Well, last week marking the transition from six to five weeks out from show day was one hell of a long haul.

I thought I hit a wall before, but this was more like a full-body slam into a mountain. The numbers on the scale stopped moving, and that plateau really messed up my head. One day, the number even went up. That’s hard to digest when you’re following every step of a nutrition and training plan to the letter. As I stepped off the scale every morning with a heavy heart, the workouts started to feel like torture sessions. And sleep? Forget about it. I was up half the night partly because I was hungry and partly because I was stressed over things seemingly going in the wrong direction. Then a totally new problem started (spoiler alert: here’s the ugly): constipation. Overall, I felt pretty lousy and less than motivated. I felt self-doubt creeping into my brain fully understanding the temptation to simply say “Screw this!” and throw in the towel. 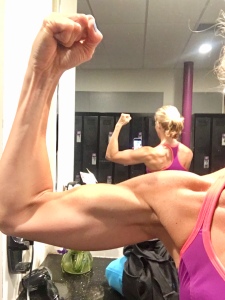 Luckily, I have a great coach, fiance and support team who helped me get over the mental roadblock. In addition to positive feedback and  a reality check on the difficulty of maintaining such discipline, my coach Jen offered one directive that really helped me get a grip. She told me to stop weighing myself every day. She also reminded me (along with my amazing support team) progress is measured by way more than just a number blinking at you from a digital read out. She also asked me a question composed of the six best words I’d heard in almost 12 weeks: “Do you like a good steak?”  Do I ever! So, Saturday I enjoyed a “feast” of lean red meat, sweet potato and arugula. This “re-feed” not only sent my taste buds into orbit, but I also slept better than I had in days and woke up refreshed.

Then came Sunday: my total rest day. Mother Nature has been super kind to me this summer as I’ve been able to enjoy some quiet time by the sea pretty much every week since this all started. This week’s beach time was a little chillier than usual and a mighty sand-pelting wind sent me home early, but those two hours of “vitamin sea” therapy gave me time to breathe and reflect on the challenges I’ve overcome so far. I left the beach with some added strength for my mind and spirit that will help me get through the next five weeks. I’ve come this far. No way I’m giving up now.

So onward I go knowing full well there will be more hurdles, aches, pains, hunger pangs, serious cravings and plain old difficult days ahead. This is when I’ll really rely on the power of upbeat music, motivational quotes, self-affirmation and any other source of positive energy to get me through. Eye on the prize. To all of you who reached out this past week via text message, emails or posts on social media, I offer an extra hearty thank you. You helped more than you’ll ever know to get over that mountain and back on a somewhat steadier path in this unprecedented journey to have fun, be fit and feel fabulous!

It’s hard to believe this Motivation Monday brings us exactly two weeks away from Labor Day. Most consider the holiday the unofficial end of summer. As I sat on the beach on the last day of my last vacation of the season, I realized how much time can be wasted thinking about how many hours or days we have left to enjoy something instead of seizing and savoring the present moment.

I stared at the roaring sea, listened to the waves crashing against the sand and started breathing a little more deeply. I wanted to savor the scent of salt and sunscreen and embrace the feeling of the heat on my sun-kissed skin. However, somehow the my-vacation-is-almost-over panic crept in to my head and in to my heart. Panic about the future. Back in the concrete jungle. Back amidst the cacophony of sirens and horns. Back amongst the crowds of students on the subways and more people in the streets.

I know I’m not alone in this constant struggle between living in the present and worrying about what’s to come. As my mom pointed out, how can we not project about what’s two days or two weeks in the future when we’re bombarded with back-to-school sales in June and Christmas promotions in July?

Then I went for a last long beach walk, and one of my all-time favorite quotes from the legendary Dr. Seuss popped into my over-analytical head:

“Don’t cry because it’s over. Smile because it happened.”

And I did smile. I realized how fortunate I was to be back in Montauk with my parents after last year’s hiatus because of my father’s emergency heart surgery. I realized the ocean will continue to churn and then settle into a calm, just like the different seasons and stages of life. At some point, each of us may face the end of a vacation…a job…a marriage…a life. My goal as I move toward a new season is to remember it’s healthier for the body and the spirit to hold on to what was good than lose sleep and sanity over what went wrong and what we can’t get back.

So when life seems overwhelming, I will close my eyes and envision the mighty sea to give me the energy I need to keep going. Whatever gives you strength- a good workout, an image of your children laughing without a care in the world, a conversation with your best friend – enjoy as many of those moments as you can this week and in the weeks ahead. We can’t change the fact that time will always march forward. But savoring the only thing we have control over in that journey – the present moment – can help us take on life’s challenges while keeping us on the course to have fun, be fit and feel fabulous!