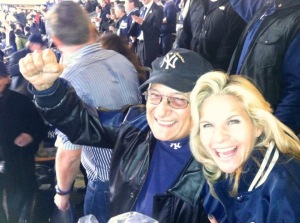 One of my all-time favorite photos from a winning post-season.

As I get older, I am constantly finding more reasons to repeat a well-known saying: life is what happens to you when you’re busy making other plans.

As many of you already know from my social media posts, October 11th was a horrible day. I won’t share all the details, but I will say it was just after 10:30 am when life changed in an instant. I was with my parents on Long Island and just walking into a medical building to meet a new doctor for Mom. Holding one of my arms per usual, Dad stopped suddenly and uttered 10 terrifying words: “Laura, I can’t breathe. I think I’m having a heart attack.” He was. The next five or ten minutes were a blur, but if it wasn’t for several fast-acting good Samaritans and an automated external defibrillator provided by a doctor’s office on the first floor of that building we were walking into, those would have been Dad’s last minutes with us.

In the chaos that followed, Dad was taken to Winthrop Hospital in an ambulance, and Mom and I met up with him in the emergency department before he was taken away to have a stent placed in the main artery of his 82-year-old heart. He then spent five days in the ICU. By day three, he was walking around the floor and cracking jokes. Even more miraculous is the fact that Dad’s is one of the rare cases where the heart muscle suffered zero damage. His strength has always overwhelmed me, but never more than in this instance.

So many reasons to smile at the finish line that day!

Of course, during those five long days, everything stopped except for being with Dad. There was no gym. Normal healthy eating habits were impossible to maintain with so many hours spent in the hospital. And we won’t even talk about sleep. While life was anything but normal, we tried to find some sense of it where we could. That meant following through with my plans to participate in my first Making Strides Against Breast Cancer Walk on October 14th. Dad told me he’d feel better knowing I finished the four-mile trek. So, I did. James pounded the pavement with me, and we happily joined the sea of pink making waves around Central Park. As with all the Avon39 walks before, I walked in honor of warrior survivors like my Mom and in memory of those who lost their brave battle, including my friend Elizabeth.

A little more than two weeks later, breast cancer awareness month is winding down and Dad continues to make strides including a good follow-up visit with his cardiologist. He has even started in-home physical therapy. As I continue to keep an eye on his progress, I also worry about Mom taking care of herself as we all continue to recuperate from the emotional strain of this unprecedented time.

At the risk of sounding like a cliché, this not-so-typical Motivation Monday post is another reminder about how precious life really is. As a journalist and producer who’s used to meeting and setting deadlines, it’s not always easy to adapt when plans go awry. It’s even harder to accept being powerless. That’s why it’s important to stay on top of the things you can control. Like telling the important people in your life you love them. Pursuing your passions. Not taking one day for granted.

It’s been a hell of month. I wrap up this final October post with a huge thank you to Dad’s cardiologist, and to all the physicians, nurses, aides and entire staff who took care of Dad at Winthrop. We are also beyond grateful for the overwhelming number of prayers and good wishes that continue to come via texts, emails and phone calls from family and friends as far away as Italy and Canada. In addition to keeping Dad’s spirits up, the good vibes have helped Mom and I though the exhausting days, too. Onward we go toward Dad’s full recovery; some rest for Mom; the re-launch of my healthy routine and all the other chances we have to have fun, be fit and feel fabulous!